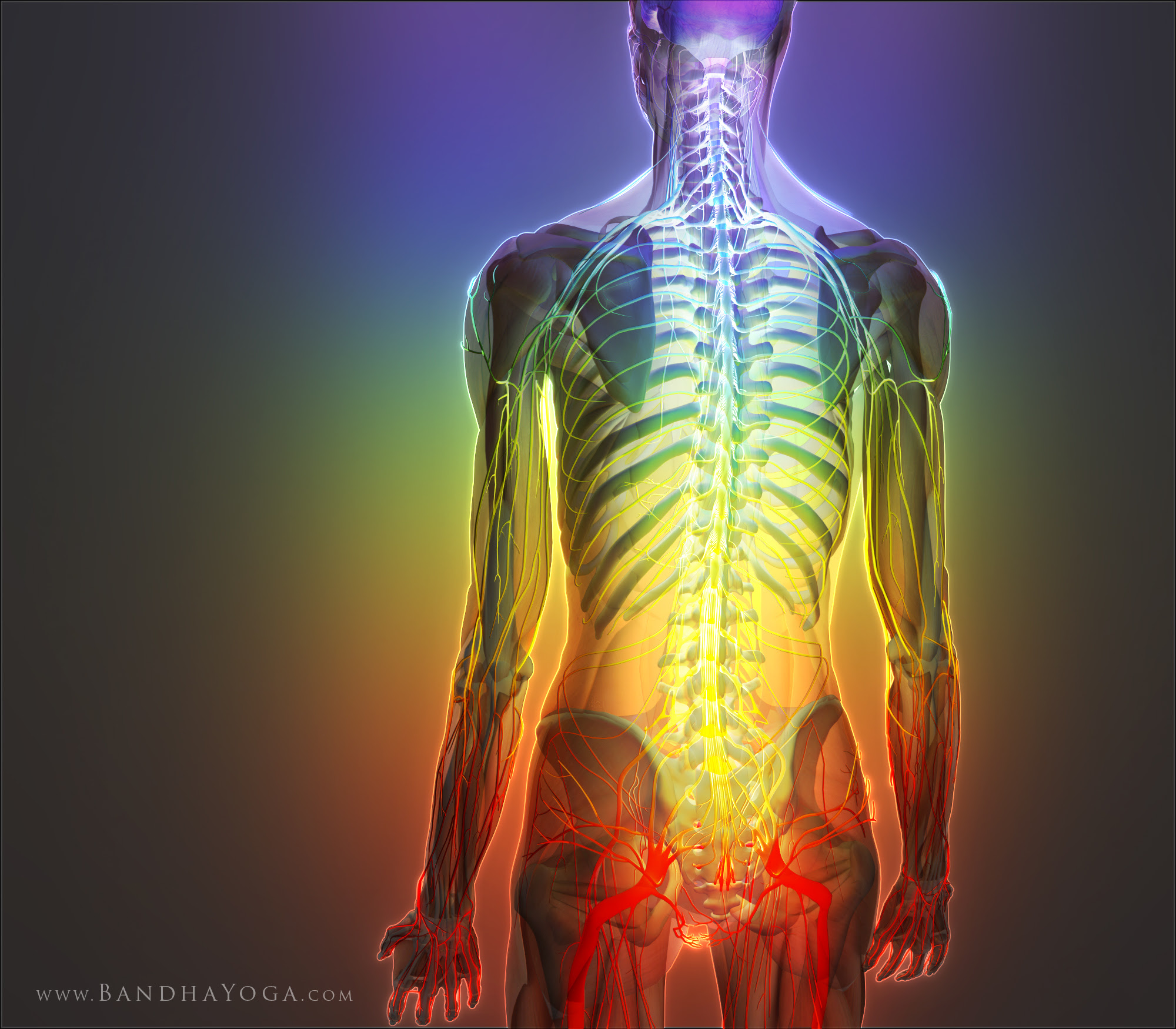 First, let’s look at the channel that connects the energy centers, according to yoga physiology. The Sushumna Nadi is said to run through the center of the spinal cord, connecting the seven chakras or subtle energy centers of the body. To understand exactly what this means, turn from yoga physiology and consider the spinal column itself. It is made up of vertebral bodies, the discs between them, and the ligaments that link the vertebral bodies to one another. The spinal cord runs in the spinal canal, entering the skull through an aperture called the foramen magnum. 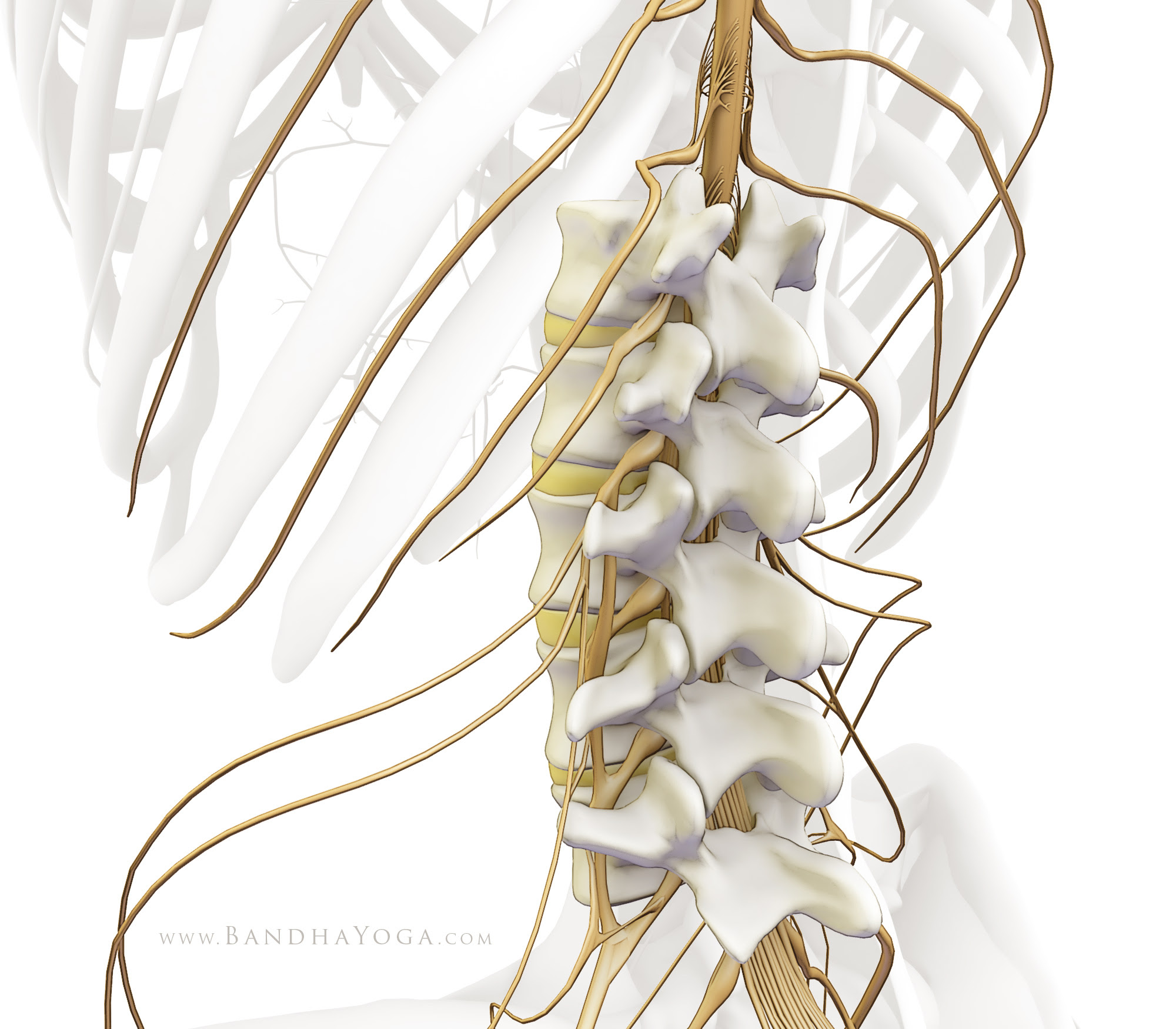 With this in mind, let’s look at a condition that affects the spinal column and, thus, has the potential to affect the Sushumna Nadi. Degenerative disc disease (DDD) is a condition, or medical malady.  It has been shown to affect as much as 90% of the population. This condition was previously believed to have arisen primarily from “wear and tear” on the intervertebral discs. Recent groundbreaking research, however, has shown that DDD is primarily hereditary, or genetic, in origin. The authors of "The Twin Spine Study: Contributions to a changing view of disc degeneration," state:

“The once commonly held view that disc degeneration is primarily a result of aging and 'wear and tear' from mechanical insults and injuries was not supported by this series of studies. Instead, disc degeneration appears to be determined in great part by genetic influences.”1

Ok. So we have, within our DNA, something that determines a degenerative process affecting us at our core--the intervertebral discs. Further, it appears that most of us have this affliction to some degree or another. Interesting.1,2,3,4,5,6,7,8

Furthermore, yoga does not cause degenerative disc disease; it may have been developed to circumvent it.

Now, we know that DDD is associated with clinically relevant low back pain, but it can also be present asymptomatically, with no pain at all. With this in mind, it becomes interesting to consider how this genetically determined condition affects us beneath our conscious awareness.  Does this genetically encoded defect also affect us on the energetic level? For example, does it create blockages to the flow of energy within the Sushumna Nadi? If so, the next question becomes, “does practicing Hatha yoga have the capacity to over-ride this defect?”

It is said that Hatha yoga re-connects us to the Sushumna Nadi, thus developing higher potentials in the mind and the body. Just as myths and legends say that we lost our connection to our higher selves at some point in time, so many esoteric practices have also become “lost" arts. The re-emergence of Hatha yoga is a relatively recent phenomenon, and it remains in the developmental stage. Because Hatha yoga uses the physical body to reinvigorate our connection to the subtle body, combining accurate Western scientific knowledge of the body has the capacity to truly refine the practice. Considering that the practice of Hatha yoga has now reached a critical mass in the population, what could a true “re-connection” to our higher powers mean?

Unsurprisingly, there is an element that has attached itself to yoga that is working diligently to derail this awakening process. They are attempting to do this by employing a manipulative methodology known as “Problem, Reaction, Solution." This process involves manufacturing a perceived problem that is designed to evoke a reaction (always anxiety or fear) and then offering a solution to the “problem” created. Since the problem was based on deception, so is the solution, which always involves disempowment. This scenario is typically presented under the guise of "protecting" you. Examples of how this is being used to manipulate fears in yoga are included below.

As background for the first example, let’s look at herniated discs (a separate, though related pathology to DDD). Did you know that 40-75% of the population has some type of asymptomatic (painless) herniated disc? Put another way, the majority of people have some type of asymptomatic disc herniation before ever walking into a yoga class. Scientific references regarding this are included below. Like DDD, practiced properly, yoga doesn’t cause the disc herniation; it works with and around it.

Keeping this in mind, let’s look at some widely circulated information on forward bends that seems to imply that forward bends in yoga cause disc herniations. It begins with a graphic description of lumbar disc herniations; however, absent from this description is any mention of the fact that most of us have asymptomatic disc herniations anyway. Also absent is any real evidence that yoga forward bends cause disc herniations. (My preliminary analysis of the data on ER visits for injuries from yoga did not reveal one herniation caused by yoga). Nevertheless, those circulating this information know that they can cause anxiety by implying that forward bends harm the discs. So far so good: a problem is presented, and a reaction (anxiety) is caused. All that’s left is the solution. The solution that has been circulated is to perform forward bends while sitting on a stack of blankets with the knees bent over a bolster, using the weight of the body to slump into the pose. While this is excellent preparation for sitting in a chair (or on a couch), it is almost unrecognizable from a yoga forward bend. Furthermore, the “slumped” posture has been shown to increase the pressures in the lumbar intervertebral discs, potentially harming them. 15,16,17

Practising (and teaching) in this manner also establishes a “fear-avoidance” behavioral pattern, whereby the practitioner becomes habituated to doing the pose this way.18 The “solution” to the fear based “problem” thus creates a vicious cycle that disempowers the practitioner on both psychological and physical levels. This pattern of graphic descriptions of herniated discs and forward bends has been circulated several times in the media, (including with instructions to avoid using the protective and empowering mechanisms described in our previous post on the thoracolumbar complex).

So, to recap, we have all of the elements of “Problem, Reaction, Solution,” but all of them are based on a false premise: the implication that yoga causes a core problem (herniated discs). This is a well-known disinformation technique: imply that the problem was caused by the potential solution.

Deceptions of this nature are multilayered in that they also disempower yoga teachers, who naturally do not want to cause herniated discs in their students and, thus, find themselves in a “fear-avoidance” pattern of behavior in their teaching. Further compounding this disservice to teachers is that these types of articles open the door for a student to claim that the teacher caused a herniated disc that was already present prior to the student attending class.

A passive aggressive variation of this theme is the manufacturing of a “dilemma” around a valuable and beneficial pose, implying the risk of injury. This technique also manipulates a fear of injury, so that the solution to the dilemma is for a practitioner to avoid the pose.

Part of this process involves the “invoking of authority.” This can take the form of falsely attributing conclusions to a medical journal, as with the statement people with strong quads and misaligned kneecaps experience rapid progression of arthritis. A variation of this disinformation technique is to characterize something as a “fact supported by substantial evidence” without providing any such evidence (usually because none exists).  Another way to “invoke authority" is via “experts” who insert their opinions; however, upon careful examination, these individuals often are not actual experts. A variation of this concept is executed when a deception is being exposed; the calling of a “summit” or “panel” of “experts.” These events, often peopled by “stuffed shirts” and controlled by the few are designed to reach a disempowering “consensus opinion” that has been scripted beforehand. We’ve seen this happening many times in government and in the media.

Fear and anxiety are two of our most powerful emotional responses; they form in infancy and are very easy to manipulate. The same pattern of manipulation can be found in the situations we are discussing; create a problem to evoke anxiety, couple it with yoga, disempower the practice. Should persons engaging in this be creating “standards” for the practice?

Friends we are living in an exciting time. Scientific discoveries like the genetic basis of degenerative disc disease may uncover many new understandings about our past, present, and future. More to follow...

Check back again for our next blog post where we will go into greater detail on the stabilizing mechanisms of the spine with another strategy to aid in preventing lower back strains in yoga. Also, be sure to "like" us on Facebook and download your copy of our free E-book.