The Mind—Body Connection in Yoga

Many of the benefits of practicing yoga cannot be explained by modern Western science—especially the mystical aspects. Nevertheless, an advantage of approaching yoga scientifically is that we can often identify elements of the practice that produce a benefit and then use our knowledge of science to amplify the effect.


In today’s post we’ll take a look at the neuroscience behind the way the brain “sees” the body. Our video illustrates the “motor homunculus.” This is a visual map of the proportionate representation of the body in the brain. It is derived from the work of Dr. Wilder Penfield, a renowned Canadian neurosurgeon. He developed this map by stimulating regions of the brain in epileptic patients during surgery and then documented what parts of the body were affected. Dr. Penfield’s work was a pioneering contribution to medical science. It was original, elegant in its simplicity, and has stood the test of time.

How to Lengthen the Hamstrings in Janu Sirsasana

In our previous post, we discussed how tight hamstrings can produce hyperflexion of the lumbar spine in forward bends such as Uttanasana. We also illustrated how releasing the hamstrings can aid to prevent this problem. Today we’ll show you a simple, yet powerful technique for using a spinal cord reflex arc to create length in the hamstrings. 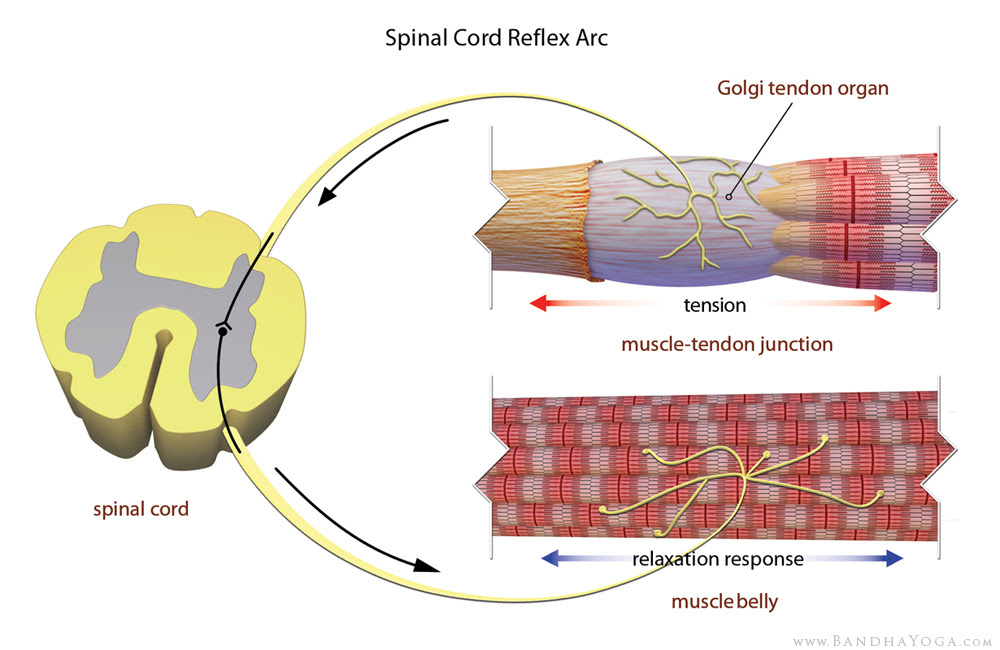 Proprioceptive Neuromuscular Facilitation (PNF)
Sports medicine experts long ago perceived that this particular reflex arc could be carefully manipulated to lengthen muscles. Using this knowledge, they invented a technique called proprioceptive neuromuscular facilitation (PNF), or facilitated stretching. It is the most powerful method for gaining length in muscles to improve flexibility. Yoga uses stretching, so why not use PNF in our practice to deepen the asanas?

Here's a quick 2016 update from the science literature on your hamstrings...

Biomechanically speaking, tight hamstrings can affect the position of your pelvis, especially in forward bends. This can, in turn, affect your lumbar spine because tight hamstrings produce a pull on the ischial tuberosities and tilt your pelvis back (as shown below in figure 2).

This interaction is known as spino-pelvic rhythm and is how the pelvis and lumbar spine move in relation to each other. Ideally, we want to have have a forward bend come predominantly from pelvic movement (pelvic dominance) rather than from the lumbar (lumbar dominance).

To this end, I wanted to share a couple of articles from the recent science literature relating to how tight hamstrings affect your pelvis and lumbar spine. The first one discusses spino-pelvic rhythm in relation to the hamstrings. These researchers investigated forward bends (essentially Uttanasana) in subjects with tight hamstrings vs flexible hams.

And in a subsequent article they concluded that:

"Dynamic stretching could change the spino-pelvic to a pelvis-dominant motion, indicating that flexible hamstrings are important for preventing low back pain."

Yet another article reported that:

(click on the references below to read the articles)

Figure 2 illustrates what happens when your hamstrings are short or tight...

As the research demonstrates, stretching your hamstrings can help take the strain off of the ligaments and disks of the lumbar spine. Click here to read more on this subject. Click here to read about the role of the thoracolumbar fascia and the core muscles in protecting the lumbar. Click here for some cool information on gaining flexibility in your hamstrings as well as the myofascial connections between your hammies and your feet. (This shows how everything is connected...)


Here's a quick review of the anatomy of your hamstrings...

Thanks for stopping by. Click here to browse through our books for more key information on anatomy, biomechanics and physiology related to your yoga practice! See you later this week for a QuickQuiz on your hamstrings...

How to Use the Abdominals to Release the Back in Uttanasana

I used to quote the writer, Emily Dickenson, as saying, “See the world in a grain of sand…” Then a friend of mine explained that, actually, the quote was by William Blake.

So much for this surfer dude acting cultured . . .

Anyway, the point is that many of the things we learn in one pose can be applied to another.  Similar muscles work in Paschimottanasana as in Uttanasana (with variations).  Physiological principles, such as reciprocal inhibition between agonist and antagonist muscles, also apply across the board for other skeletal muscles. I find that when we approach learning in this way, it makes what appears to be a daunting subject like anatomy more manageable.


For example, let’s look at using the abdominals in Uttanasana. The abs are composed of four muscles. Moving from the surface inward, we have the rectus abdominis in the front and the external obliques on each side. Deep to these are the internal obliques, with the deepest layer being the transversus abdominis. Contracting these muscles flexes the trunk forward and increases intra-abdominal pressure (by squeezing the abdominal organs). Bending forward from the trunk stretches the erector spinae of the posterior kinetic chain. The erector spinae comprise three columns of muscles that lie parallel to the spine. From medial to lateral, these are the spinalis, longissimus, and iliocostalis.

How to Use Nutation to Refine Uttanasana, Part III—A Fringe Benefit

In our last post, Part II of this series on Uttanasana, we gave a trick for engaging the tensor fascia lata (TFL) and gluteus medius. Contracting these muscles allows us to access movement at the sacroiliac joint and aids to protect against hyperflexion of the lumbar spine.

Now, when we do a forward bend from the hips, the gluteus maximus stretches. This produces a pull on the femurs that can externally rotate them and turn the kneecaps slightly outwards. Ideally we would like the kneecaps to face directly forward. An added benefit of engaging the TFL and gluteus medius is that it internally rotates the thighs. The gluteus minimus contributes to this action when the hips are flexing. This counteracts the pull of the stretching gluteus maximus and brings the kneecaps to face forward—the optimal form of the pose. Access this fringe benefit by fixing the feet on the mat and gently attempting to drag them apart.  Feel how this internally rotates the thighs.

How to Use Nutation to Refine Uttanasana, Part II—the Tensor Fascia Lata and Gluteus Medius

In the last post, I talked about how masters of various disciplines are continuously refining their art—even though they are masters. I followed the anecdote with some background information on sacral nutation. In this post I will give you a tip on how to use the tensor fascia lata and gluteus medius muscles to create some opening for movement that can incrementally deepen your forward bends, especially Uttanasana.

The tensor fascia lata (TFL) and gluteus medius are muscles at the sides of the pelvis. The TFL originates from the front of the iliac crest and inserts onto the iliotibial band and from there onto the outside of the front of the tibia. The gluteus medius originates a bit farther back on the iliac crest and inserts onto the greater trochanter at the top of the femur (thigh bone). The main action of these muscles

How to Use “Nutation” to Refine Uttanasana—Part I


Many moons ago I had the privilege of spending an extended period studying yoga at the Ramamani Iyengar Memorial Yoga Institute in Pune, India. During my time there I made it a point to watch Yogacharya Iyengar practice whenever possible. I not only observed the form of his body but also the way he practiced, how he moved from one pose to another, and the way he worked in the individual asanas. I was fascinated by how he continued to refine his art. Bear in mind that B.K.S. Iyengar is the author of Light on Yoga, and he had been practicing for over 50 years at the time. Still, like a master artist, he polished his poses as if his body were a dynamic sculpture.


One day, as fate would have it, I was the only other person in the practice hall and Master Iyengar was going through his backbend sequence (picture the most advanced backbends from Light on Yoga to get an idea). I sat on the staircase and watched. He finished, and as he was getting dressed asked if I would like to go with him to visit some people around the city. The next thing I knew, I was in the back of a car speaking with Mr. Iyengar. I mentioned that he still worked to improve his poses, even though he was a master of the art. He gave me a somewhat surprised look, as if to say, “Of course I am!”

How to Use Your Shoulders to Deepen Uttanasana

The deltoids are large muscles on the surface of the shoulders that produce many of the major movements about this joint. They are divided into three parts—the anterior, middle, and posterior thirds. The anterior portion originates from the front part of the clavicle (collarbone) and the acromion process and inserts onto the outside of the upper humerus. The main action of the anterior deltoids is to raise the arms in front of the body.